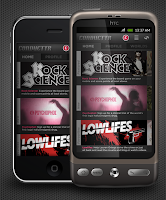 It’s been a while – a year or more – since I last wrote something about possible tools to use for transmedia storytelling. In the meanwhile, so many new opportunities, products and tools have come up. What prompted me to write this post was two tools that are out there now and that represent quite different spectras of the transmedia field; both could be very useful for a given project, and I’d love to try them both out within the scope of a project. Basically, everything and anything that makes it easier for me to get my stories to the desired audience in a logical and engaging and compelling and immersive way, I’m all for it, and these two services might just fit the bill. F irst there is Conducttr Mobile, launched at the Transmedia Living Lab in Madrid the other day by Rob Pratten. Now, Conducttr has been around for a while as a tool for automating the telling of a narrative over several platforms – online, text messages and so on. This seems like the very logical next step, to take it out from the laptop or tablet and into the world of mobile.

A three-part ecosystem, where the audience takes part of a mobile app which lets them take part of different ”Worlds”, each belonging to a separate story or story world, the designers of the narrative get a ”cloud-based network intelligence” and the developers get an API to play around with. All in all I think it’s a service that would be interesting to explore; many times costs, time and an inability to code oneself put stumbling blocks in the way when trying to create the experience truest to one’s own vision. Conducttr Mobile just might be the solution to many of those occurences. I hope to be able to get back with a review at some point; just need to find a proper project to use it in!

The second service I thought I’d mention is one called Weavrs. If Conducttr Mobile is about a controlled experience in the hand of any and all consumers, Weavr is about setting things in motion and letting go. It’s described as a ”character / animation / curatorship platform”, where anyone can create a Weavr, which forms from the social web, blog, comment, check in and chat. It can be given a Twitter account and interact with the rest of the world. A number of Weavrs can be set up to act in the virtual world; by being given some intial interests, Weavrs learn from their social web and learn new emotions, growing to reflect the world around them.

Sounds spacey? Yes it does. But I think that’s why I like it; the idea of creating a story (perhaps distributing part of it via Conducttr Mobile J ) and creating the characters – one or more – as Weavrs with carefully selected initial interests and characteristics, and then letting them lead their own lives in the virtual world… now that’s interesting. Who knows what new stories or story archs might arise from their interaction with each other and with real people?

One of several add-ons currently being produced is called MiniMonoMyth, something that is describes as ” dynamically generated narratives. Resulting in unique timelines of digital experiences; stories woven from the fabric of the web into the daily lives of your Weavrs.” Again, this is a service I would really like to try out; can it actually deliver the experience I’m hoping it can? Looking forward to finding out.

Now, these are two examples, and I’m sure there are quite a few others. Let me know in the comments what I’ve missed!